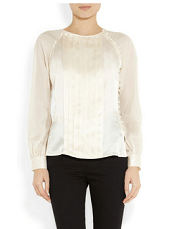 I know what you’re going to say:  a $555 bouse?  (And it isn’t even leather!)  Still, come on, look at how gorgeous this blouse is — a perfect piece for inspiration.  I love the silk, the pleats down the front, and the silk-covered buttons all the way down the side (which remind me of wedding dresses, actually).  I particularly like that the sleeves end in a proper cuff with two buttons.  Lovely.  It is, ahem, $555 at Net-a-Porter (and ShopBop). Temperley London Julia Pleated Silk Blouse