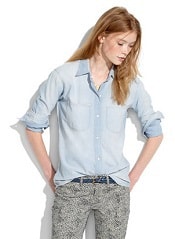 Happy Fourth of July, everyone!  I’m kind of loving these ex-boyfriend shirts from Madewell — I like the long length, the oversized nature, and the laid back nature.  I could see it looking cool with skinny capris, worn open with a tank over short shorts, or even knotted at the waist and worn with a pencil skirt.  It’s $69.50 at Madewell (which is offering 30% off all sale styles with code HAPPY4TH — don’t forget to check out the rest of our July Fourth sale round up!).  Perfect Chambray Ex-Boyfriend Shirt

P.S. We will hopefully be doing some more behind-the-scenes site maintenance this weekend — please bear with us.
(L-2)

Update: As mentioned, we’re missing about 25 (maybe more) comments from late 7/3 into midday 7/4 that were made while we were moving servers.  I can’t restore them to the thread, but I went back and took screenshots of the entire thread and PDFed it.  (And yes, next time I’ll just put up a splash page instead and redirect everyone to the emergency blogspot blog.  Thank you to everyone for your patience with this.)