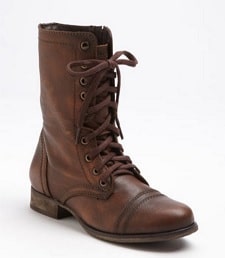 Something on your mind? Chat about it here. This shoe has 1,988 (!) positive reviews at Nordstrom, and I’m kind of digging it — it reminds me of a slightly more feminine version of Doc Martens (which I’ve been thinking about since I saw Sheryl Sandberg wearing them recently-ish in a casual outfit). I think it’s a nice look with leggings or skinny jeans for the weekend, and I like how adjustable this particular boot is, with all of the laces. I also like the zipper on the side, so you don’t actually HAVE to do the laces. Happy weekend! Steve Madden ‘Troopa’ Boot (L-3)