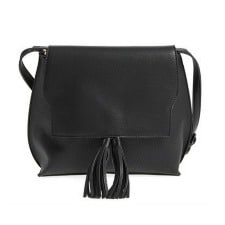 Something on your mind? Chat about it here. I am finally coming around to the crossbody trend personally, and I like the tassled, round looks we’re seeing. This simple black bag from Sole Society just got marked down at Nordstrom, and the super affordable price with the very safe color makes it the perfect bag to try if you’re still unsure about the trend. (Here’s a similar bag in a lighter blue for $85 if black feels too heavy.) The pictured bag is now $33 at Nordstrom. Sole Society Tassel Faux Leather Crossbody Bag (L-3)