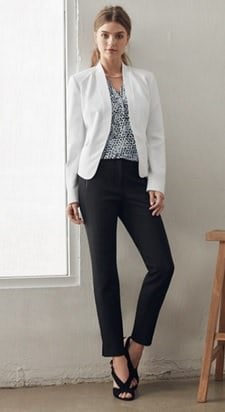 Happy Monday (and Happy Ramadan to all who celebrate!)! I am iffy, at best, on white pants and skirts for work — but even I rock a white blazer from time to time. The right one has a crisp, summery look about it — and from experience they work the best when they are as un-labcoat-like as possible. Here, the short, shrunken shape works (look at the view from the back of the blazer!), as does the sleek collarless shape. The blazer is $278-$298 in regular, petite and plus sizes, and also comes in a cobalt blue. Classiques Entier Open Front Stretch Twill Jacket

Here’s a lower-priced option (30% off) and another in plus sizes.

Psst: Today is the start of Nordstrom’s “Personal 10 Points Day” offer. From now through 6/19, you can choose one day to earn 10 points per dollar (instead of 2 per dollar) with your Nordstrom card at Nordstrom and Nordstrom Rack — in stores or online. (To use at Nordstrom.com, just select your preferred date in Checkout.) Some suggestions on what to check out from the Workwear Hall of Fame: this $150 blazer, this dress marked to $65, these $98 pumps, these $99 pumps, these $85 wedges, and this $150 tote bag.

Oh, and if you’ve been on the fence about Akris, there are TONS of gorgeous pieces in the sale still 40% off. I’m a bit obsessed with this simple blazer with mesh insets.

« Weekend Open Thread
The Hunt: Nude Flats for Work »
Back to Top