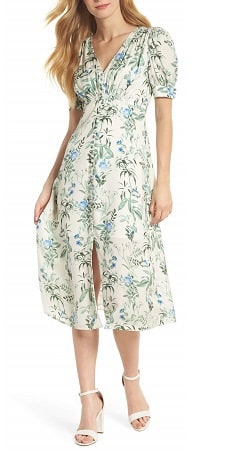 Something on your mind? Chat about it here. Readers seemed to be really loving the new very feminine collaboration between Nordstrom and the blogger behind Gal Meets Glam — and this midi dress is great for the weekend. It kind of reminds me of our long ago discussion of “the weekend you,” inspired by style maven Elsa Klensch’s statement that on summer weekends, “my fantasy … is to look as though I just stepped out of an F. Scott Fitzgerald novel wearing Gatsby-style long skirts and gently flowing chiffon scarves.” This dress seems to belong in a different fantasy (perhaps one more inspired by the era from The Notebook), but if you’re a city girl, just slipping on a dress like this can really take you to a different place mentally very quickly. The dress is $178, available in bone/blue (pictured) and beige/orange (lucky sizes only). Lauren Botanical Garden Print Midi Dress This post contains affiliate links and Corporette® may earn commissions for purchases made through links in this post. For more details see here. Thank you so much for your support!