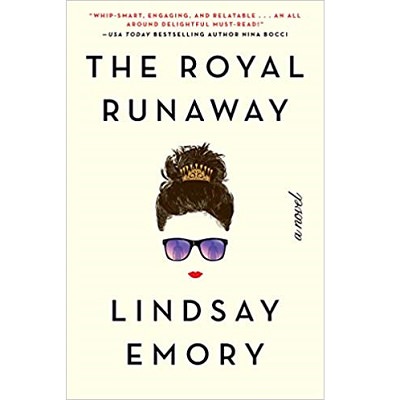 I just read The Royal Runaway and wanted to recommend it as a really fun, easy, chick lit kind of book — total brain candy. It’s the kind of book you gobble up quickly and then are really sad when it’s over. The author, Lindsay Emory, is new to me, and the plot seemed so completely crazy that I wasn’t sure I was going to like the book or roll my eyes at it. Here’s the bit from Amazon:

Princess Theodora Isabella Victoria of Drieden of the Royal House Laurent is so over this princess thing.

After her fiancé jilted her on their wedding day, she’s finally back home after spending four months in exile—aka it’s back to press conferences, public appearances, and putting on a show for the Driedish nation as the perfect princess they expect her to be. But Thea’s sick of duty. After all, that’s what got her into this mess in the first place.

So when she sneaks out of the palace and meets a sexy Scot named Nick in a local bar, she relishes the chance to be a normal woman for a change. But just as she thinks she’s found her Prince Charming for the night, he reveals his intentions are less than honorable: he’s the brother of her former fiancé, a British spy, and he’s not above blackmail. As Thea reluctantly joins forces with Nick to find out what happened the day her fiancé disappeared, together they discover a secret that could destroy a centuries-old monarchy and change life as they know it.

Funny, fast-paced, and full of more twists and turns than the castle Thea lives in, The Royal Runaway is a fresh romantic comedy that will leave you cheering for the modern-day royal who chucks the rulebook aside to create her own happily-ever-after.

In fact I wound up loving the book, and although the heroine is a bit too perfect I really, really liked her. (I just finished it early this morning and was thinking how much I was reminded of 90s-era heroines like the leads in Bring it On or Buffy — capable, can-do attitudes with a bit of snark.) If you’re a fan of Sophie Kinsella and other light romances this one is definitely a must try. It’s $2.99 on Kindle at Amazon, or the paperback is $8.99.