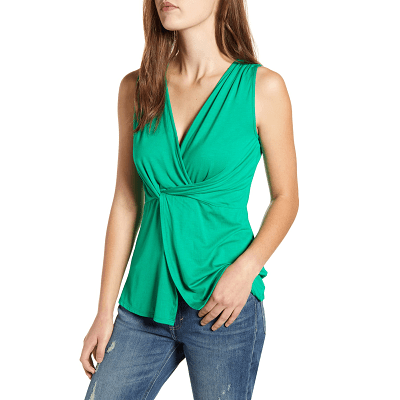 There are a TON of silky “party” camisoles out there right now, like the one we posted a few weeks ago, as well as this one, this one, this one, or this one  — but I kind of like this interesting wrap top from Loveappella (the brand behind that great basic maxi dress if anyone is on the hunt; it’s been around for years!). Not only is this top affordable, getting good reviews, and machine washable, the green looks like it would be fun worn with velvet or faux leather pants and maybe a nice circle cardigan. (The pink, blue, and black colors are all really nice too!) It’s $39, available in sizes XS-XXL, and some sizes and colors may arrive by Christmas Eve, depending where you are; there are also versions with long sleeves, and a similar option with short sleeves. Drape Faux Wrap Top

Psst: if anyone is on the hunt for long, fancy dresses, these two gorgeous options both somehow came up in my feed — I have nowhere to wear the green velvet one but I am now sale-stalking it, ha.