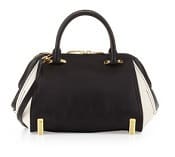 Simple colorblocking seems to be in right now (I’m remembering that Row handbag splurge from few weeks ago) — but this one is much more in my price range (kind of), and I like the goldtone hardware and feet. It’s $450 at CUSP. Zac Zac Posen Daphne Satchel Bag

« How to Look Professional With a Wool Allergy
Frugal Friday’s TPS Report: Faux Wrap Blouse »
Back to Top