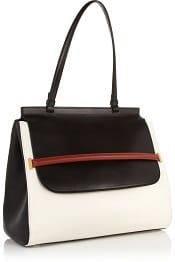 I kind of love everything The Row is doing — they specialize in great basics, but everything just seems modern, fresh, clean, and super lux. Of course, you pay for that (this tote is $3,150) but I like the smart interior partitions, as well as the colorblocking and single handle. The Row Color-block Leather Tote