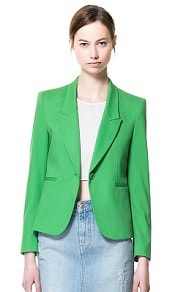 I think I had this exact same color of blazer a few years ago. I got a great deal on it, but expected to not wear it enough — something about my skin (blue undertones) makes this color of green usually make me look ill. And yet… I wore the blazer all the time. With all-black outfits… with white and gray… with navy… it turned out to be a really versatile piece and a nice pop of what was, for me, an unexpected color. This Zara blazer also comes in navy, but the green is giving me fond memories (and I always love piqué cotton for summer). It’s $89 at Zara.com.PIQUÉ BLAZER

« Suit of the Week: BOSS Black
How to Respond to Work-Related Praise »

« Suit of the Week: BOSS Black
How to Respond to Work-Related Praise »
Back to Top