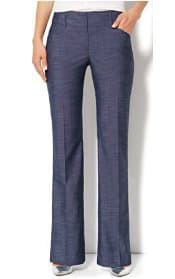 New York & Company has a number of cute pants right now, and considering they’re having a B1G1-50% off sale (plus free shipping on orders over $50), I thought I’d share. My top two picks would be this nice dark blue bootcut pant — it’s distinctive and interesting but still super easy to wear with white, black, or navy on top; if you want to have a bit of fun with it wear it with purple, oxblood, or the green that’s everywhere this season.  I like that the pants are machine washable, available in sizes 0-18, and highly rated. My second pick: this lovely speckled tweed pant, also machine washable.  (Fine, this skirt is pretty cute too.)  The pictured blue pants are marked $52.95. 7th Avenue Bootcut Pant

« Suit of the Week: Limited
Foot Tattoos and Interviews »

« Suit of the Week: Limited
Foot Tattoos and Interviews »
Back to Top