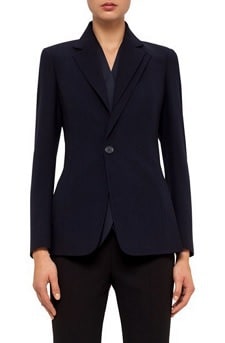 Happy 2016, everyone — we hope you’ve had a great year thus far. For our first workwear pick of the year, I present this ah-ma-zing navy blazer from Akris. I loooove the layered lapel on one side only, and the whole blazer has this sharp, tailored look to it. As styled, it’s a great example of how to wear navy with black. It’s available in sizes 8-14 at Nordstrom for (gulp) $3,990. Akris Double Face Wool Blend Jacket

Here’s a lower-priced blazer (that includes plus sizes).