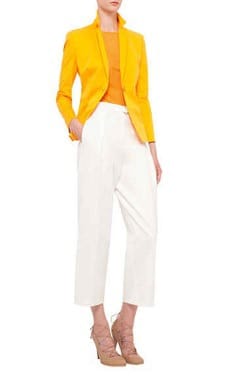 I forget where I read it, but apparently orange is the hot new color of the moment, and my personal favorite way I’ve seen it styled is like this: with a darker orange layered with a lighter orange. It’s bold, it’s fun, and it looks surprisingly fresh and put-together. It looks great with white as shown here, but try it with navy or beige as well. The blazer is $1190, and the skinny stripe/rib knit t-shirt is $395. NM is sold out of the shirt but for white, while Nordstrom has it in white, tangerine, and navy/cream. Akris Punto Long-Sleeve One-Button Blazer

A few lower-priced options are here (tall sizes only), here, and here (on sale); two plus-size alternatives are here and here (linen).