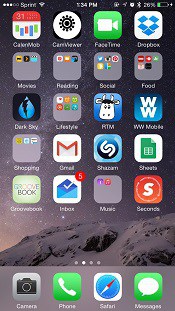 2019 Update: we still stand by a lot of these apps for working women — but you may want to check out our more recent discussion of our favorite apps in 2019.

Ladies, what are your favorite apps for working women?  I rounded up some of my favorite Android apps  a few years ago, but now that I’ve switched over to iPhone (in December 2014), I’ve been collecting an ever growing list…

I’ll also mention Omnifocus for all you GTDers out there — my brother loves it, but I haven’t tried it yet.

I will also give a “hugely helpful” shout out to my bluetooth keyboard — I use it all the time for focused writing on my iPad (my focus is sooo much better if the mouse is out of the picture and I don’t have 10,000 tabs open), but I also discovered during some flights last week that it’s also hugely helpful for writing on my iPhone.  (I went back to Northwestern University  for a conference/group meeting for a women’s alumni group I’m part of, Council of 100.)  The tray space on the plane was so limited I found I actually preferred writing on the Notes function on my iPhone, and managed to crank out about 10 posts between the two flights.

What are your favorite apps, ladies? Which apps add to your productivity and/or help you manage information? Which ones make your life easier?