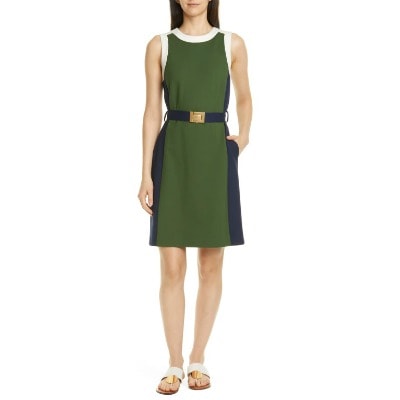 I love the color combination in this A-line dress. Tory Burch can sometimes read a little too casual for workwear, but this could be my new favorite Summer Friday outfit. If bare arms fly in your office, I think this looks great on its own. If not, I’d probably pair it with a white blazer or a navy cardigan, if you can find one to match. It’s $368 at Nordstrom, available in sizes XS–XL. Belted Colorblock Ponte Dress

Two more affordable options are at Macy’s (regular and petite) and Lord & Taylor (plus).

« Coffee Break: Isabelle Pointy Toe Pump
Have You Ever Taken a Vacation Alone? »

« Coffee Break: Isabelle Pointy Toe Pump
Have You Ever Taken a Vacation Alone? »
Back to Top