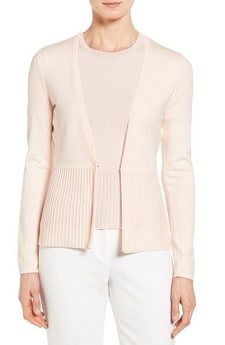 Oooooh — these aren’t exactly my colors, but I can still get behind this gorgeous wool-blend cardigan from Boss. I love that ribbed lower panel, the fitted shape, and even that it comes in a twinset, a trend that I have a sneaking suspicion might come back sometime soon. (I’ve seen a TON of higher-end designers doing them again.) Boss ‘Fily’ V-Neck Wool Blend Cardigan

« Coffee Break: Nikki 60mm Sunglasses
How to Prepare for Law School »
Back to Top