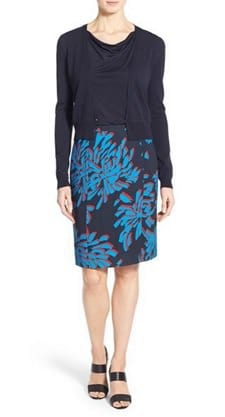 I’ve said it before, I’ll say it again: I love blue and red together. This pencil skirt from Boss is a perfect example of how well they work together and what a springy, sophisticated vibe the colors can have. I’d pair the skirt with simple neutrals, like a white top and nude-for-me heels. The skirt is $375. Boss ‘Veala’ Print Pencil Skirt

A few lower-priced options are here, here, and here; here’s a plus-size alternative.

« Holiday Weekend Sales (Happy Easter!)
7 Tips to Help You Hire a Personal Trainer »
Back to Top