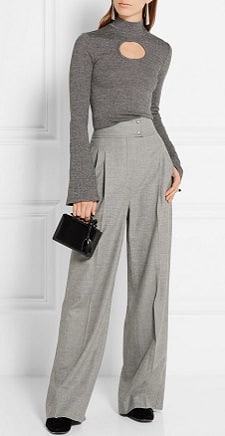 I like these pants because, while I feel like wide leg trousers are a classic, almost vintage look for the office — they also are very trending and now. A high waist never hurts, as you’ll note here, nor do the seams and darts on the top rear, ensuring a flattering fit.  I also kind of love the bell-sleeved, bodycon turtleneck with the keyhole, but sadly it’s almost sold out.  (Similar here, here, and here (plus).) The pants have a matching blazer; the pants themselves are $1,235. BARBARA CASASOLA Stretch-cashmere and wool-blend wide-leg pants

Looking for a more affordable version of the pants? Check this pair or this pair ($85!); a plus size version is here.

« Weekend Open Thread
How to Wear Booties to the Office »