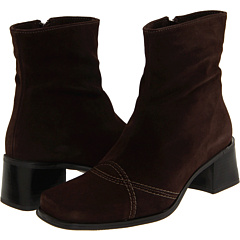 Whenever we talk about boots for the winter, the favorite brand that readers mention is La Canadienne. 6pm has a number of styles on deep discount, including this suede boot with a 2″ heel. Although not among La Canadienne’s waterproof offerings, they look like a well-made boot and for a great price: they were $210, but are marked to $63 at 6pm.com today. La Canadienne – Jaimy (Tobacco) – Footwear