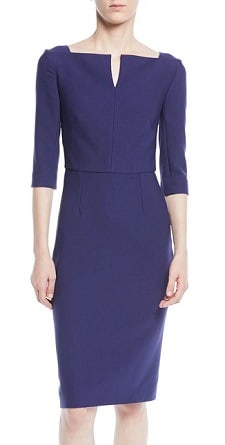 This gorgeous sheath dress is from Roland Mouret. I always like Roland Mouret — the styles are very tailored and polished and sleek with sort of a vintage vibe. I honestly love pretty much everything I’ve seen. To me, this dress looks purple on the screen, but it’s listed as navy, which I think is a great color for a dress because you don’t have to worry about matching your navys together. (Note that you can wear black shoes with navy.) I love the split-neck bateau neckline, and I think this dress is lovely if you have $1,525 to spare. Unfortunately, it does have an exposed back zipper that runs the full length of the dress. It’s available in UK sizing 6–18 (although the 6 has sold out). Elbow-Sleeve Split-Neck Crepe Sheath Dress

A lower-priced option is at Brooks Brothers, and two plus-size options are at Macy’s and Amazon.

« Weekend Open Thread: Reformation
The Best Work Bags for Interviews, Commutes, Your First Day of Work, and Beyond »

« Weekend Open Thread: Reformation
The Best Work Bags for Interviews, Commutes, Your First Day of Work, and Beyond »
Back to Top