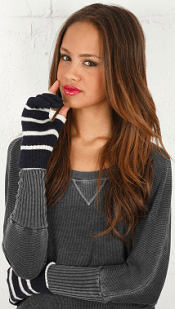 Warm gloves are a must, but you don’t want to be totally inconvenienced when you need to text, swipe, tweet, and more. I like the look of these wool gloves from Etre, which are missing the fingertips on the thumb and index finger. They come in solids, too, but I like the slightly wacky stripes. They’re $65 at Singer22. Etre Touchy Gloves in Oxford Blue with Ecru Stripe