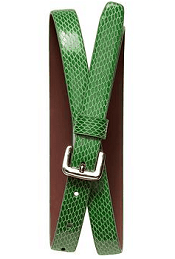 I like the simple look of this “exotic” belt from Banana Republic — although one should note that it’s polyurethane, not any animal skin.  (Although hey, polyurethane is kind of exotic, right?)  It comes in a variety of fun colors: green (pictured), coral, yellow, and mint, as well as camel and black. It’s $39.50 and selling out fast in some colors. Today, use code BRAPRIL to bring it down 40% (to $30ish). Exotic belt