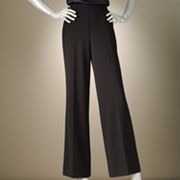 I’ll admit, I would not have picked out these pants based on the picture at right, but reader J wrote in to recommend them, and there are a ton of other positive reviews on the Kohl’s site. Reader J notes “I just got these JLo pants and I am pleasantly surprised – the fit is great. I’m a tall girl and they run long so I did not have to fret about ordering special sizes. I only wish they were available in more colors.” Nice! They were $60, but are now marked to $42. Jennifer Lopez Wide-Leg Pants