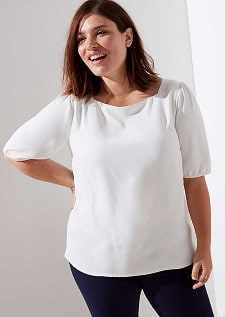 Happy Friday, everyone! Loft seems to have decided that square-neck blouses are in right now — and I’m kind of into them, too. It’s not quite a boatneck and not as bra strap-baring as that neckline tends to be. It’s still pretty and feminine and has a bit of personality. This top, which is $49.50, comes in regular and petite sizes as well as plus sizes, and we’re picturing the plus-size model. Note that (since it’s not obvious in the image here) it has a high-low hemline. It’s machine washable and has a few positive reviews so far. Square Neck Blouse

Psst: Loft is offering 40% off dresses, skirts, and shorts today!