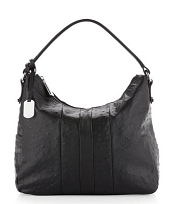 Even though I love my collection of colorful purses, a good black hobo is something even I consider a basic. I have two Furla bags that I love, and so this black ostrich-embossed hobo caught my eye — it’s simple but a bit interesting, too. It was $448, but is now marked to $315 at Last Call by Neiman Marcus — and today only, you can take an extra 30% off the entire site, bringing the price to around $220. Hooray! Furla Soho Ostrich-Embossed Hobo Bag, Onyx
(L-2)

« Alumni Networking – When You Know No One
Wednesday’s TPS Report: Starburst Pleat Sheath Dress »
Back to Top