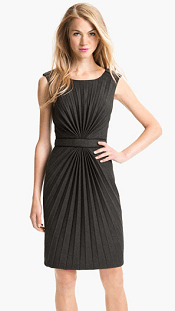 Happy Wednesday!  I love this starburst pattern — it’s so, so pretty, and such a great way to dress up a plain gray flannel dress.  I’d wear it with a blood red shrunken blazer, perhaps.  It’s $138 at Nordstrom. Maggy London Starburst Pleat Sheath Dress