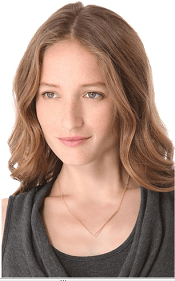 I’m digging this simple “V Neck necklace” from Gorjana — it looks delicate, but is much bolder than a pendant necklace or something. Very cool. It’s $58 at ShopBop. Gorjana Greer V Neck Necklace

« How to Nap at Work
Tuesday’s TPS Report: Ibiza Bis Concealed Sweater »
Back to Top