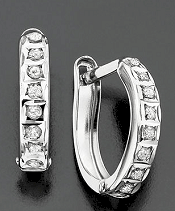 Macy’s Election Day Sale ends today, but you can still get an additional 15% off on select merchandise, including this great basic pair of tiny gold diamond hoops. They were $300, then $149, on sale for $134 — and with code ELECT they come down to $114. Hoop Earrings, 14k White Gold Diamond Accents (L-2)

« How to Wear a Brooch
Wednesday’s TPS Report: Jersey Faux-Wrap Dress »
Back to Top