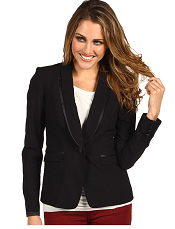 I really, really like this blazer — which is why I’m recommending it even though it’s only available in a size medium. That bit of piping, the covered buttons on the cuffs, the general shape — very nice, and the makings of a great separate. The fact that it’s 60% off doesn’t hurt, either: was $298, now marked to $120 at 6pm.com. Juicy Couture Sharp Suiting Blazer