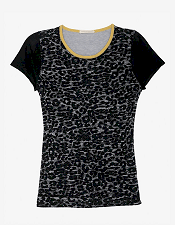 For some reason, this morning, I am in the mood for leopard print. There’s a lot of it out there right now (including this lovely cardigan at Piperlime, or this gorgeous blouse left in lucky size 6) but I think for this morning’s TPS I like this silk/cotton knit tee with “lime zest trim.” I think it would be great under a blazer, or perhaps worn on top of a crisp white button-front blouse. It was $278, but is now marked to $89 at Intermix. Leroy & Perry Leopard Knit Tee Seen a great piece you’d like to recommend? Please e-mail [email protected] (L-all)

« Suit of the Week: Akris Punto
Pumping in a Different Office »

« Suit of the Week: Akris Punto
Pumping in a Different Office »
Back to Top