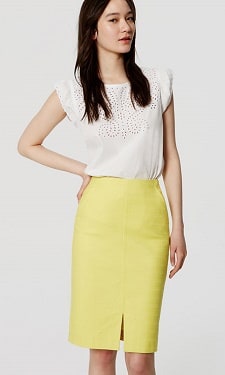 Our daily workwear reports suggest one piece of work-appropriate attire in a range of prices. What a lovely yellow pencil skirt! A bright, almost neon yellow can be great for work, particularly when paired with gray. Try it with a gray tee and a longish gray cardigan (like this one or this one), or of course with a simple gray blazer and gray tee. The skirt is $69 full price, but right now you can get 30% off everything if you sign up for Loft emails. (They’ll send you the code.) Loft Slit Pencil Skirt Here’s a plus-size option. P.S. Ann Taylor is offering 50% off everything and free shipping with code CYBER50 through 4/18 at 3am EST. Seen a great piece you’d like to recommend? Please e-mail [email protected] (L-6)