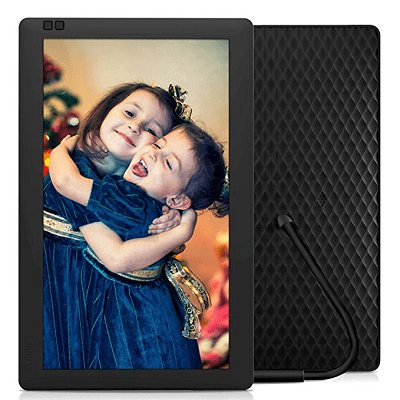 I’m doing a post on warm winter pants that is taking forever, so I’ll post today’s gift idea early — this is one of my favorite new things from the past year, so I’ll do a little review of our Nixplay WiFi photo frames. I’ve had a digital photo frame for a while and it’s been a PITA, to be honest — getting new pictures on the flash drive in a timely manner was impossible, and when I did get photos on the flash drive there were Major Problems: selfies were always upside down, the vertical ones would be cut off or horizontal. I did my best (read: spent waaaaaay too much time editing photos) but it was kind of impossible to keep up with. So I was intrigued when I somehow came across a Twitter exchange between Lin Manuel Miranda and Neal Katyal where one was recommending WiFi photo frames as the best gift for grandparents — and I was blown away by the idea. They seemed pricey, but we splurged for Mother’s day and got three frames: one for our family, and one for both grandmothers. And it’s been awesome! It’s taken a bit of energy to go through older photos (read: I’ve spent way too much time on it), but for 99% of people, just the ease of getting NEW photos on the frame in a timely manner is going to be awesome. Photos are almost all turned the correct way, no one’s cut off, and you get to actually look at all of those 1000s of pictures you take. Easy, foolproof present for grandparents, parents, and others who want to look at a lot of family pictures. There are three other groups of people that this is a great gift for — the first I’ll call “digital photo hobbyists,” which I suppose I consider myself because I enjoy spending mindless hours on this stuff. But for that person who just got all their archival photos digitized and is happily sorting and labeling them? This is so for them. The second group this is a great gift for is the person with the big fancy digital camera, who may also be an avid traveler, who takes a zillion amazing photographs regularly. The final group that I think this would be good for is the Super Pinterest User — the person who seems to is really calmed by photos of beautiful scenery, inspirational words against pretty backgrounds, and other things like that — you could also use this frame to display those kinds of things, or even to mix them in with your personal photos, either in different playlists to play at different times, or in one huge shuffle. (One of my favorite things is how easy it is to create and change new playlists — so if you’re like me and have all of the old family holiday photos in one playlist, with one touch of a button you can have all of the frames showing only holiday-themed photos, or Halloween-themed photos, or birthday-themed photos, etc.) It’s a great way to see all of the thousands of pictures you take, and manage them well. The pictured version is the one I’ve bought four times now on Amazon (the Seed, I guess), but Nixplay has a few different lines offering WiFi digital photo frames, and retailers like Best Buy also sell the frame. The price bounces around a lot on Amazon if you prefer to buy through them, but I don’t know if it’ll go down again before the holidays. (The 13″ one is pretty big, FWIW — also note that you can orient the frame itself horizontally or vertically and the pictures adjust.) Depending on the size of frame, the full price on Amazon is $159-$229. Nixplay Seed 13 Inch WiFi Digital Photo Frame