Curious about the big 2019 Nordstrom Black Friday sale? It should begin Wednesday, November 27, 2019 — sign up for our newsletter to stay on top of all the great sales!

The below content is about the 2016 Nordstrom Black Friday Sale. 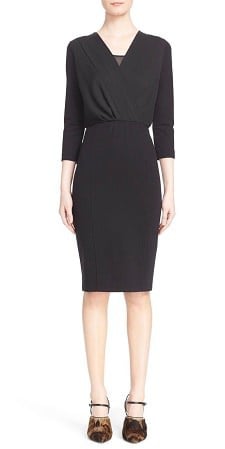 Happy Cyber Monday, ladies — are you on the hunt for anything in particular today? I keep going back to the Nordstrom sale (I’ve placed like four orders now) and there’s still a ton of great stuff, including some items that are an extra 20% off in honor of Cyber Monday. (I’m still looking through the inventory to see if it’s the same clothes from earlier in the weekend. Here was our workwear roundup when the Nordstrom Thanksgiving sale began; here are some gift ideas I put together from the sale — that purple sweater at the top of the post is super soft and machine washable; I highly recommend if you’re on the hunt for yourself or a friend.) I’ll update the prices in the post if there are any changes as per today’s sale.) Designer duds like this gorgeous Max Mara dress (pictured) are on sale, but not the extra 20% off deal, alas — but it is still marked 40% off. I love the graceful, sophisticated pleat wrap, work-appropriate length, and the fact that the stylist here resisted overstyling it, letting your imagination do the work. (I’d either add a long, opera-length necklace or perhaps a heavily textured belt, like a black haircalf belt perhaps.) The dress was $745, but is now marked to $446. Max Mara ‘Sauna’ Pleat Front Jersey Dress

Here’s a great plus size sheath dress that’s now down to $95, and this previously recommended Splurge dress with wrap details is now down to $167 (!).