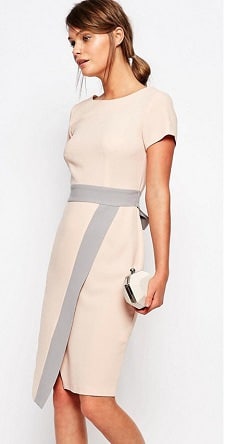 I sometimes get intimidated by the vast selection at ASOS — I know there’s a ton of good stuff in there, but finding it can be… challenging. I like almost everything by the brand Closet, though (whether it’s for work or weekend) — the dresses look sophisticated, with equal parts classy and equal parts sexy. This pale peach and gray one is simple and gorgeous, and only $81 new. (If you’re looking, the brand’s kimono-sleeve dresses seem to be hugely popular.) Pictured: Closet 2 in 1 Midi Dress with Wrap Skirt and Contrast.

The brand also has a few styles available for plus sizes.

Update: Nordstrom seems to have started putting stuff in the sale section, including this DvF dress and this Classiques Entier dress, both previously featured here.  (Looks like there are a ton of Classiques Entier dresses and suits in the sale now.) I’m traveling today and can’t do a full round up, but thought I’d raise the flag in case you guys wanted to check the sale section!

« Suit of the Week: Brooks Brothers
Etsy Workwear: Seven of the Best Shops on Etsy for Workwear »

« Suit of the Week: Brooks Brothers
Etsy Workwear: Seven of the Best Shops on Etsy for Workwear »
Back to Top