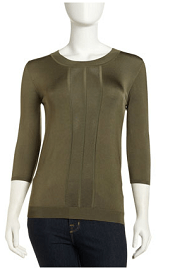 Last Call by Neiman Marcus is having a pretty great sale right now: extra 10% on top of 30% off entire purchase (on top of their “regular” sales prices). There’s a ton of great stuff, some in lucky sizes — for today I’m liking this olive crewneck sweater by Pink Tartan. I like the three-quarter length sleeves, the wide crew neckline, and the ribbed hem — it looks like a great basic sweater. I’d wear it with navy trousers and, perhaps, purple pumps. It was $225, but is currently marked to $119 — after the 30% + 10% it comes down to $75ish. Pink Tartan Chevron Crewneck Sweater Seen a great piece you’d like to recommend? Please e-mail [email protected] (L-3)

« Suit of the Week: Joseph
Staying Polished at the Metal Detectors: Tips for Women Lawyers at the Courthouse »

« Suit of the Week: Joseph
Staying Polished at the Metal Detectors: Tips for Women Lawyers at the Courthouse »
Back to Top