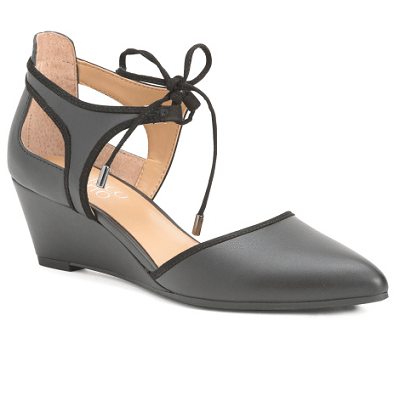 I was hunting for other color options of these booties that were best sellers last month for readers, and found these fun pointy toe wedges by the same brand (Franco Sarto, one of my favorites for comfort!) at TJ Maxx. I like the little tassle tie at the front, and the cutouts on the side of the heel. I’d wear this with bare legs on a warm day (know your office!) or tights, and note that this kind of wedge also looks great with most pants. The shoe comes is $34 at TJ Maxx.com.  Pointy Toe Wedges

« Some of the Top Things Readers Bought in September 2019…
Wednesday’s Workwear Report: Darted Check Blazer »
Back to Top