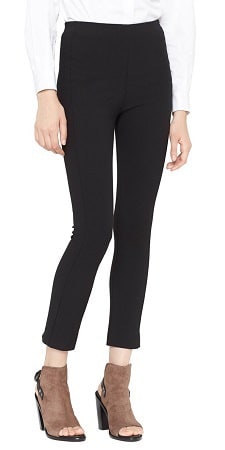 These Rag & Bone ankle pants aren’t the best choice for a conservative office, but for a casual office or a really casual day at a conservative office, they’d work well. The most notable thing about these is the reviews — people love these pants. Customers (in a wide range of ages) have written things like, “This is the pant version of the LBD,” “These might be the best pants I have ever worn,” and “These pants are a dream come true!” If I were looking to splurge on pants, I would take a serious look at these. They’re made in a cotton blend (note that they’re “dry clean,” but not dry clean only), have a back zip, and come in sizes 00-12 in black and navy. They’re $295 at Nordstrom. ‘Simone’ Slim Ankle Pants

« Weekend Open Thread
Open Thread: Who Are Your Celebrity Crushes? »

« Weekend Open Thread
Open Thread: Who Are Your Celebrity Crushes? »
Back to Top