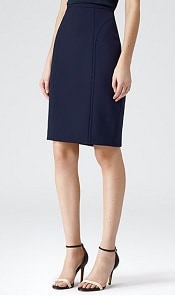 Our daily TPS reports suggest one piece of work-appropriate attire in a range of prices. This week, we welcome an old friend back to the blog — Belle from Capitol Hill Style, who was also good enough to take a week of TPS reports during my first maternity leave (and has guest posted about how to maximize a chance meeting with a VIP).


As you may have noticed, I am currently obsessed with tailored pieces for the office. This seamed navy pencil skirt has a high waist and side details that should shape the body beautifully. However, if you’re pear-shaped, I recommend ordering one size up and taking in the waist to ensure proper fit over your hips and thighs. Also, remember that pieces by UK designers tend to run small, you may need to size up regardless of shape. This skirt is $124 at Reiss, marked down from $210. Reiss “Verdi” Seamed Panel Pencil Skirt