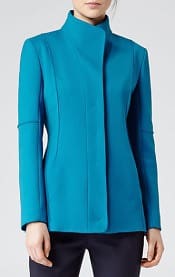 This looks more like an outdoor than an indoor jacket to me — but I’d probably wear it as both, truth be told. I like the bright blue and the seam details, and the high funnel neck. It was $395 (and the black still is), but this happy bright blue is marked down to $180. It’s available in sizes XS-L. Reiss Verona Seam Detail Jacket

« What to Look For in Interview Flats
Wednesday’s TPS Report: Cashmere Space Dye Tank »
Back to Top