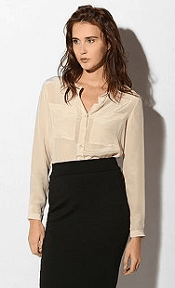 Yay, Friday! Today I’m liking this well reviewed silk blouse from, er, Urban Outfitters. Not only is it available in 8 colors, but it looks like it would be nice basic top worn tucked in, or (on a much more casual day, obviously), worn long and loose like a tunic over skinny pants. It was $69, but is now marked to $39.99. Silence & Noise Silk Blouse