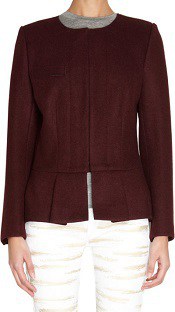 Happy Monday! I love this burgundy wool peplum jacket by Isabel Marant — the darts, the jewel neckline… lovely. I might try adding a brooch or two (or three) to the shoulder area, but that’s me. It’s $955 at Barney’s. Isabel Marant Peplum Jacket

« Weekend Open Thread
The Best Workwear for Petites »
Back to Top