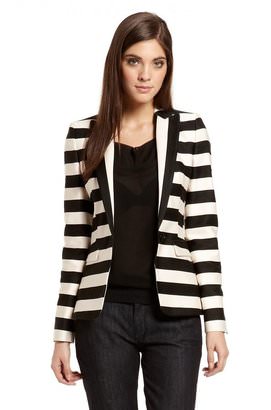 Hot, hot blazer from HUGO. I particularly love the collar and lapel, both of which have a slightly different pattern than the horizontal stripes everywhere else. For some reason I’m seeing it with a mint pencil skirt and a blue silk tee, but that’s me. It’s $650 at Hugoboss.com. Striped ‘Abelin’ Jacket by HUGO Seen a great piece you’d like to recommend? Please e-mail [email protected] (L-2)