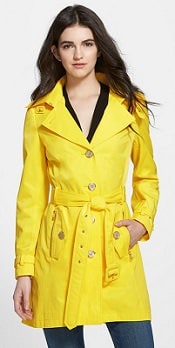 It’s finally starting to feel like spring, including warmer temperatures — but not so warm you can’t go out without a coat. I’ve always like a bright rain coat for the days when I’m not wearing a blazer; this happy yellow one from Steve Madden looks great. (Personally I hate the double-breasted trench, but if you prefer that look, check here or here.) The pictured one is $98 at Nordstrom. Steve Madden Single Breasted Hooded Trench Coat

« Giveaway: Five Winners Get One Pair of Comfort Heels from UKIES
Wednesday’s TPS Report: Bryna Silk Top »
Back to Top