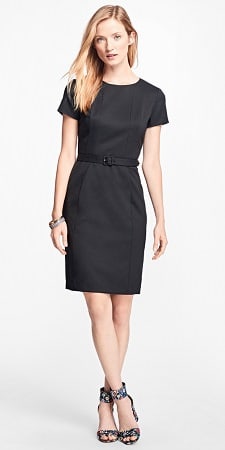 Our daily workwear reports suggest one piece of work-appropriate attire in a range of prices. Red Fleece is a great line is to check out if you’re looking for preppy clothes that are more affordable than the rest of Brooks Brothers’ offerings and have a slightly more youthful edge than you might normally think of the brand as providing. I like the sleeves here, the seaming details, and the belt that defines the waist. And — huzzah! — it does not have an exposed back zipper (and the seaming on the back is really great). It’s $148 at Brooks Brothers — and the Red Fleece shoes it’s styled with are $178. Stretch Wool-Twill Little Black Dress Right now, Brooks Brothers is offering up to 50% off select fall and winter styles as well as an additional 15% off clearance. Here’s a plus-size option at Nordstrom. Seen a great piece you’d like to recommend? Please e-mail [email protected] (L-all)

« Coffee Break: Asymmetrical Wrap Scarf
Tailoring Alterations for Women: What to Ask For to Look More Polished »
Back to Top