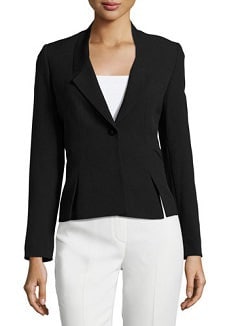 I love these kinds of shrunken blazers — I think they’re comfortable, flattering, and easy workhorses for your wardrobe. I like the front vents and straight hem on this one, and the dry clean instruction. Through this morning (8 a.m. CT), it’s just $54 at Last Call. Tahari Karson One-Button Suiting Jacket

« Suit of the Week: Tahari
How to Learn a New Language »

« Suit of the Week: Tahari
How to Learn a New Language »
Back to Top