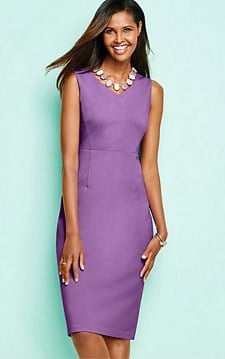 I’ll admit it: when I saw that the name of this dress was “Peek-a-boo back,” I laughed out loud. “Hahahaha I don’t think sssssss—” I cut myself off when I clicked through and said “Oh, that’s kind of nice.” So. Forget the dumb name, or images of godawful sheath dresses from a year or two ago with cutouts exposing the lower back or something — the back of this dress just has a nice little detail sized slightly bigger than a keyhole slit. I like that the dress comes in petite, plus sizes, plus-sized petites, and regular sizes 00-20, and is only $109. We’ve pictured the purple (try it with navy or gray, or olive if you’re feeling adventurous), but it comes in five other colors. Talbots Peek-a-Boo Back Ponte Sheath

« Coffee Break: Uber Clutch
Tales from the Wallet: How to Make a Budget »

« Coffee Break: Uber Clutch
Tales from the Wallet: How to Make a Budget »
Back to Top