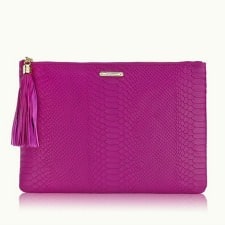 I was just gifted a cobalt blue clutch from GiGi New York, and it may be one of my favorite clutches ever — the blue is bright, the leather is supple but not so delicate, and the clutch is big enough for all my stuff. For work I’m more a fan of this slim clutch, which works particularly great if you have fashionable after-work events (date, girls’ night, whatever) with a big tote full of work stuff to lug around before that. The clutch is $170. GiGi New York Uber Clutch

« “Dry Clean Only” Clothes and How to Wash Them
Wednesday’s Workwear Report: Peek-a-Boo Back Ponte Sheath »

« “Dry Clean Only” Clothes and How to Wash Them
Wednesday’s Workwear Report: Peek-a-Boo Back Ponte Sheath »
Back to Top