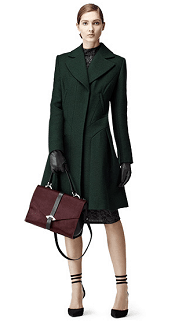 2019 Update: We’ve added a carousel of our 12/18 picks including some favorite wool coats for work  — you can also check out our fuller discussion and roundup of the best winter coats to wear on your commute.

Sure, we all know what basics professional women are supposed to have in their closets, but if you’re buying one for the first time or replacing one you’ve worn into the ground, it can be a pain to find exactly the right incarnation in stores. In “The Hunt,” we search the stores for a basic item that every woman should have.

I have always done my winter coat shopping in January (if not later) because of all the deals that you can get. Coats in particular are generally classic pieces, and considering the amount of wear you may get from it (wearing it several days a week, for months, for several years — at least) I’ve always seen it as a justifiable “splurge” item. For today’s Hunt, I thought we’d look for wool coats that you could fit a blazer beneath. The trick here is to get something several sizes larger than what you normally get — if you’re a size 4, consider looking at 6s and 8s. Readers, have you bought any great wool coats lately? Do you wear blazers beneath your coats, or do you have another system (e.g., keeping your blazers at the office)?