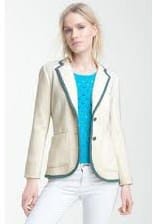 I love this blazer. The ivory color seems just right, as does the tweed-like piping on the edges, the (flattering!) patch pockets, and the bracelet-length sleeves. Gorgeous, gorgeous. I would pair this with a simple, solid-colored tank or tee, and perhaps a brightly colored skirt. It’s $495 at Barneys New York. Rag & Bone Bromely Blazer